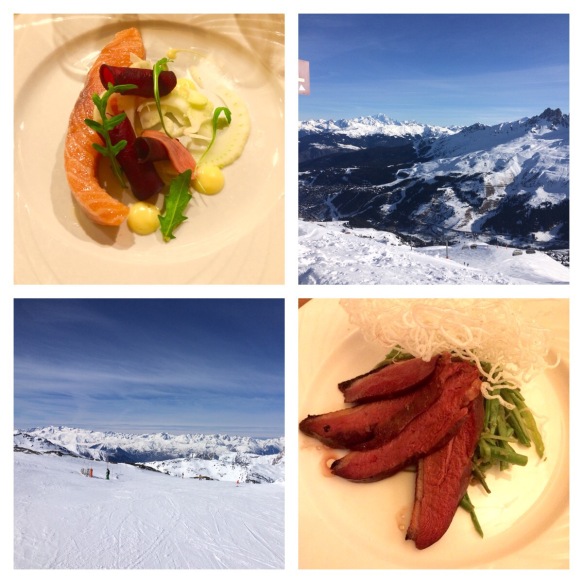 Two weeks ago five friends and I packed our bags and headed for the mountains, more specifically we were off to Meribel in the French Alps. We knew we were in for some excellent skiing and were generally going to have a great time but I don’t think anyone quite expected the culinary feast we were about to experience.

We’d been on various catered chalet skiing holidays before and decided that we’d do the same again as they’d always worked out really well. As the organised (or possibly just bossy) one, I said I’d find a chalet for us. Luckily my friends are very easy to please and all that was important was proximity to the slopes and free booze. The other thing we were quite keen on was a chalet which would just be the six of us and this is where the problem came as a lot of the chalets from the big companies are for 10 people or more. After a bit of googling I stumbled across Fish & Pips. They have 4 chalets in Val D’Isere and 9 chalets in Meribel so they’re by no means a huge company but it seems they’ve been growing fairly steadily and acquiring more chalets each year. After a quick perusal of their website I was determined that we would book one of their chalets. Why I hear you ask? They have a section on their website just about the food, and another section just about wine – AMAZING!!

The reviews were all great on the website and everyone commented on how great the food and general service was AND they had a chalet in Meribel for 6 people. It was meant to be! As soon as I sent the others the link they were totally sold, especially as Harry (hashtagcake) and Rahul (Champagne & Chutney) are both food bloggers so they were definitely also sold on the great food. Once we’d booked, the team in the UK were incredibly helpful and helped us sort our transfers and ski hire (which gets delivered to your chalet so you don’t have to trek around the village with skis on your first day!). They also got in touch about whether we had any menu preferences! There were a couple of people who didn’t eat certain things so I told them this and then made two requests – carrot cake and fondue. I know that might sound strange but everyone wanted fondue and carrot cake is possibly my favourite thing in the whole world!

Anyway, after all this planning we finally arrived at Chalet Arbe to be greeted by our chef and chalet host – Bec. And guess what? There was a carrot cake waiting for us!!! One of the girls doesn’t eat dairy so they even made her a dairy free slice! The chalet itself was amazing, they had literally thought of everything, even down to the smallest things like putting a piste map and SPF lip salve on each person’s bed. I think it’s the little touches like that (along with the food) which makes it really special.

So having eaten our weight in carrot cake and unpacked we were sitting in the living room when Bec appeared with champagne and canapés, a dream! We thought this might be a one off as it was our first night but oh no. Bec is a trained chef and so came up with the most delicious food including things I never would have thought of but it all tasted so good. I can’t fault any of it.

Each morning we woke up to breakfast which included croissants, french bread, cereals, yoghurt, granola and pretty much anything cooked which you wanted. There was also a ‘breakfast special’ each morning which always varied and was delicious. Some mornings I was a little groggy (or possibly had a slight wine head from the night before) so didn’t take photos of all the breakfasts but below are a selection of some of my favourites.

Freshly baked croissants, pain au chocolat and french bread with various jams. I swear that the french make the best bread in the world. I need to learn their secret! 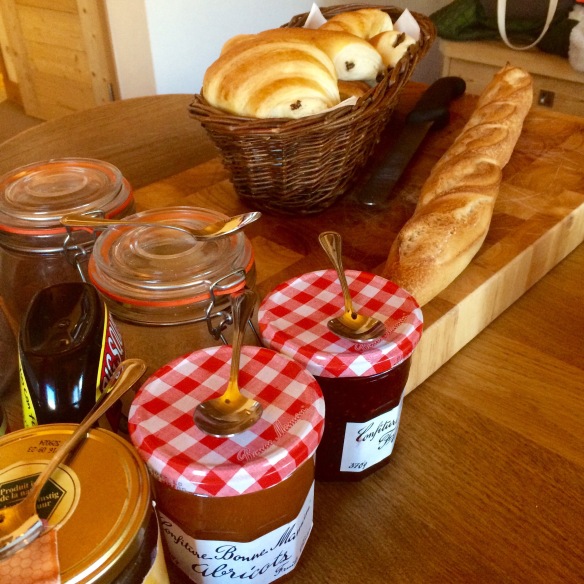 French toast with caremelised bananas and creme fraiche. So tasty and not overly sweet.

Blueberry frozen yoghurt (homemade of course) with honey and walnuts. This was probably my favourite breakfast, which surprised me as I’m usually more a fan of savoury and on paper I wouldn’t have chosen it but it was just so damn tasty!

Despite all the talk of food, it was actually a skiing holiday so after a hearty breakfast we headed off to the slopes for some fantastic skiing. We were all different abilities (2 advanced, three intermediates and one of the boys had never skied before) and I’d say Meribel (and the 3 Valleys more generally) catered really well for this. We were also really lucky in that the weather was amazing and so sunny. Luckily the snow didn’t melt in the heat! 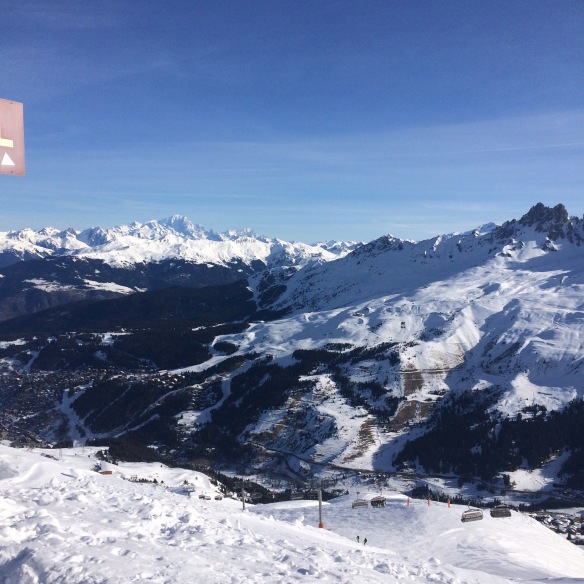 We skied (fairly) hard in the mornings and early afternoons and then went to one of the many bars up the mountains in the afternoons. There are a couple in Meribel but I think the two most notable ones are La Folie Douce and Rond Point. Folie Douce is mental. Fact. I’ve been to the one in Val d’Isere before so I had an idea of what to expect but I think we were all pretty surprised when fireworks started going off whilst the bar staff sprayed champagne (or something supposed to be champagne) all over the place. Especially as it was only 3pm!!

I think the Rond Point was definitely more for us as its a bit more relaxed and they have live bands, especially as we spotted my dream husband, David Gandy!! That’s him in the background in the red jacket. New claim to fame, I have a photo of me and David Gandy (technically it’s true)! Anyway after all the skiing, toffee vodka and dancing on tables we were in need of some serious food. Luckily that’s exactly what we got! A four course meal (and canapés) every night. If that wasn’t enough then we also got wines which were specifically paired with the food. I was in heaven!

Despite all the wine I still managed to take lots of photos of all our wonderful suppers. Are you ready for some serious food envy? (I’m not going to write how everything tastes as this post would be ridiculously long, but I would happily eat every single dish again!)

Anyway, after all the skiing, toffee vodka and dancing on tables we were in need of some serious food. Luckily that’s exactly what we got! A four course meal (and canapes) every night! If that wasn’t enough then we also got wines which were specifically paired with the food. I was in heaven! Despite all the wine I still managed to take lots of photos of all the wonderful suppers. I’m not going to write how everything tasted as this post would be ridiculously long (it’s already fairly ridiculously long) but I would happily eat every single dish again!
Are you ready for some serious food envy?
Here you go… 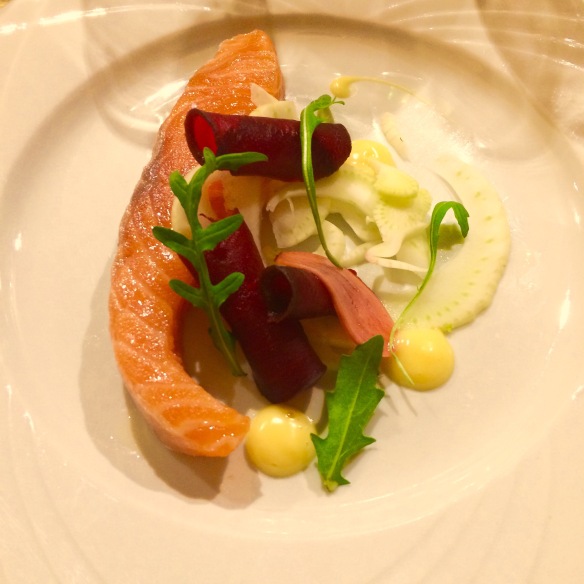 The cheese board! Every night there was a different cheese with a chutney or relish and oatcakes. Every night we managed to devour it! 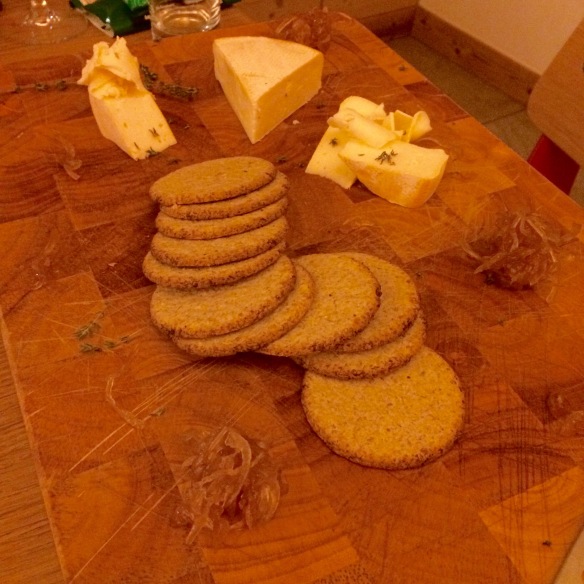 So on the Tuesday (day 4) in the afternoon we went to the Rond point and had rather a lot of toffee vodka (sorry mum if you’re reading this!) so I didn’t manage to take any photos of supper but Bec cooked us an amazing fondue!

We also went to a great place for lunch in Les Menuires where I had THE BEST tartiflette. 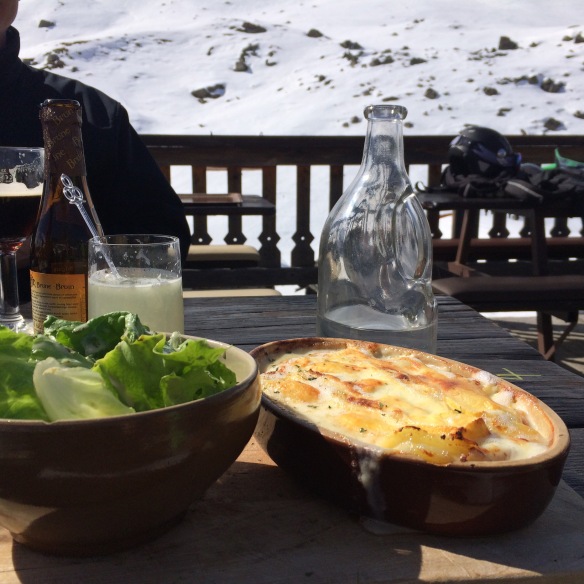 Potatoes, onions and bacon in a thick cheesey sauce, topped with more melted cheese. Might it give me a heart attack? Quite possibly. Was it worth it? Most definitely!

On the Wednesday Bec had her (extremely well deserved) day off so we headed into the centre of Meribel for supper. Both Bec and Nicky (the resort manager) gave use some great suggestions and we eventually decided on La Gallette. 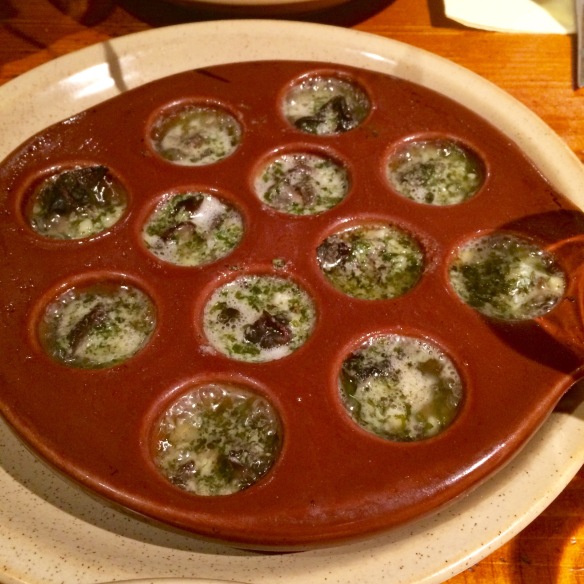 And then came the main event…the fondue! It came with a huge plate of hams and cured meats, bread and a lovely salad. 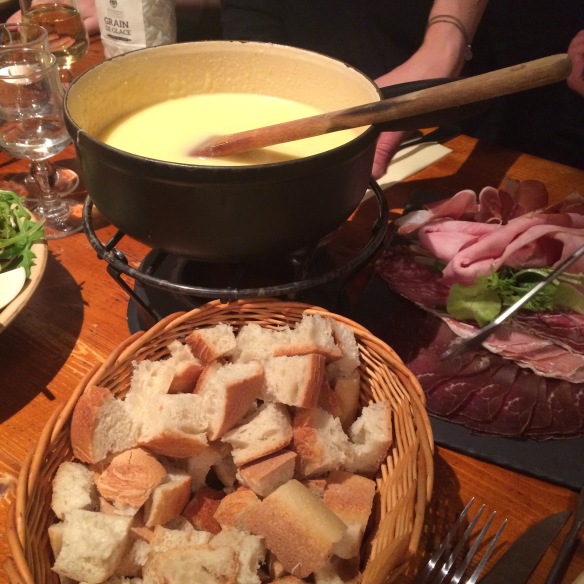 It was cheesetastic! They were definitely very generous with the wine when cooking it but we weren’t complaining! 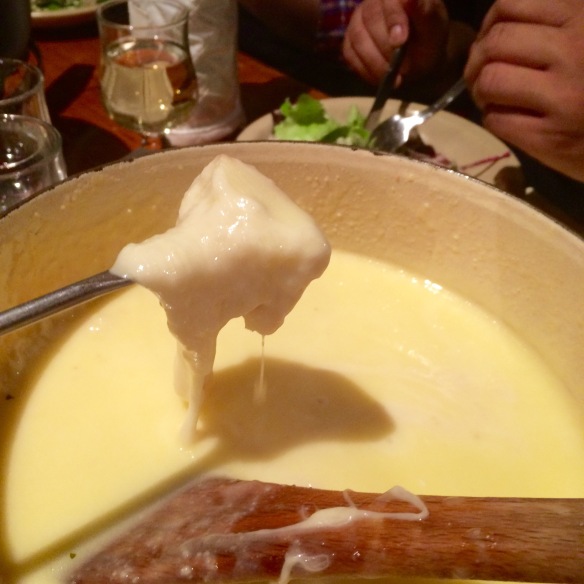 There was talk of going out afterwards but we were all in a bit of a cheese coma so went back to the chalet for a game of articulate before bed.

Sweet and sour broth with egg. It isn’t something I’d ever have chosen in a restaurant but it was so tasty and the broth had so much flavour to it.

Honey soy duck, sautéed green veg and deep fried vermicelli noodles. This was definitely my favourite dish of the holiday. Such tender duck with crunchy noodles, definitely one I’m going to try to replicate.

Cucumber risotto with ginger and lime syrup. We were all surprised at how much we liked this and the boys are still talking about it 2 weeks later! 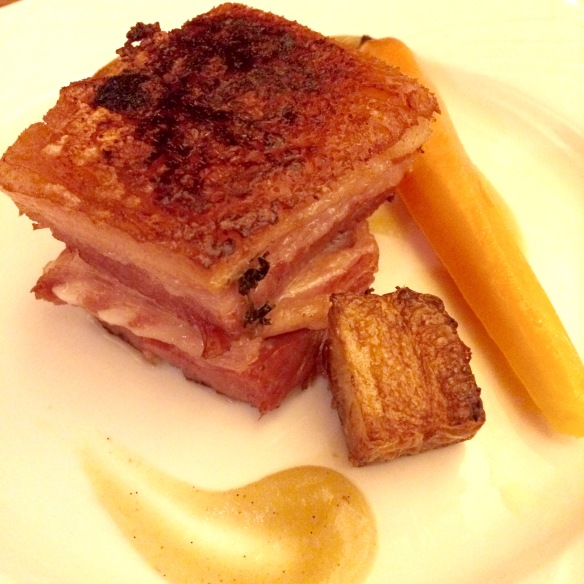 The final cheeseboard, a delicious goats cheese with walnuts and oatcakes.

I’m sure all of the Fish & Pips chefs are amazing, but we will definitely be going back next year and will be tracking Bec down and hoping that she will have us again (our chat is pretty awful!) as her food was phenomenal and she was an excellent host. I know the skiing season is coming to an end but Fish & Pips have some great deals for April so if you can’t wait until next year then why not hop on a plane to Geneva and tear up the slopes in the next few weeks? You can read all about them on their website, and I guarantee you will have one of the best weeks ever.